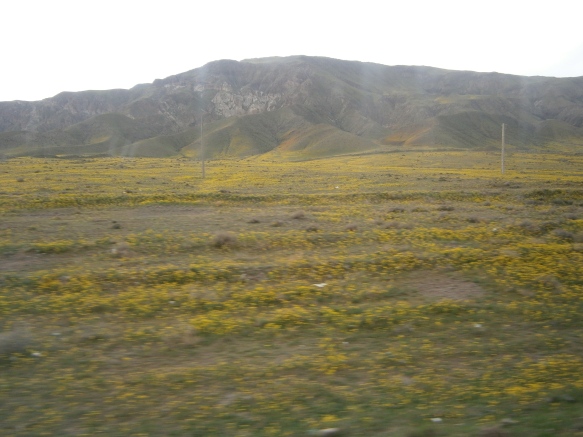 We wake up from not so good sleep but really happy that we are again at home – on the Road. We greet our neighbor – the homeless guy and we leave to look for bus tickets to Iran. As always in Turkey people start treating us with endless cups of black tea that is typically served in small cute glasses. Everyone is really polite and there are good vibes flowing among the people. We had breakfast consisting of really delicious biurek (cheese pasty) and another 5-6 cups of black tea. Then we board on the bus to Dogubayazid – a town in Turkey near the border with Iran.

It is a long journey (more than 20 hours) and our muscles cramped. There is a steward on the bus who passes by all the time and offers the passengers tea, coffee and juice, as well as disinfects the hands of the people with lemon eau-de-Cologne. In addition at night he checks the passengers with a flash light to see whether they have put off their shoes (you are not allowed to do this). I do not know why but he doesn’t tell me anything when he sees I am without my shoes : ) 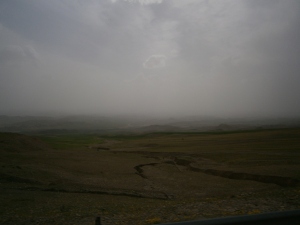 On the road through Turkey

When we bypass Ankara the landscape becomes unwooded and raw. All the women are wearing veils to cover their hair. We stopped for a short rest at a gas-station and several men came out of the bus, talking joyfully and lit their cigarettes right beside the gas pumps!

We wake up totally stiffened and benumbed from the uncomfortable sleep on the bus seats and we see typical Asian scenery around us. There are very few trees and far from us we see high mountains covered with snow. Our neighbours in the bus turn up to be from Afganistan. After 24-hour journey we finally reach Dogubayazid – dusty, border town. We see only strange people obviously from the region who pass the border. 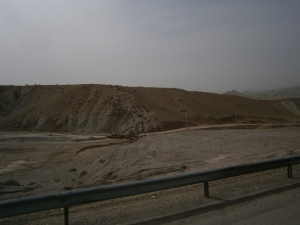 We try to hitchhike near the border but one middle-aged guy trick us to get in his car and wants 10 Turkish liras (around 3.50 euro) for the ride to the border, but he drives us only to the center of the town which is only 2 km. away. We give him 6 Turkish liras and we quarrel a little bit over that. Then we continue walking on foot. After 30 min.  of walking we are all sweaty – in Ankara was 4 degrees Celsius and in Dogubayazid is already 20 so we still had all of our clothes on. Luckily a truck stopped and took us for a short ride to the border. There we got off again since there is enormous queue for the trucks.

We enter one of our favorite countries – Iran (we were there in 2007). We walked the distance from the border control to the border city Bazrgan. The truck queue is extremely long – looks like they wait here for days on end. We exchange 10 USD and sit on a bench to take a rest – we feel really tired at this moment. Looking around we couldn’t believe how much Bazrgan has changed for 8 years.

The young women do not wear black “chador”(the typical islamic veil and long black dress women in Iran put). Now they used colored pieces of cloth and cover only half of their head – which was unimaginable in Bazargan only eight years ago. Besides this the trucks and cars don’t exhaust black smelly gasses as they used to do before, most of the houses made of sun-dried bricks are gone and there are a lot of new buildings.

When we went to Iran eight years ago we were four people driving white Volkswagen Golf II – its name was the White Swallow. When we arrived at Bazrgan back then we had to stay 3 days in it in because we needed to wait for some documents to be done. And we acquainted with a really nice guy named Rasul – he made his living as local guide, the money he charged was by his words – as much as you give – and he really meant it. For the 3 days we spent with him we became friends and he told us many interesting things about Iran and Azerbaijanand read us his poetry : ) 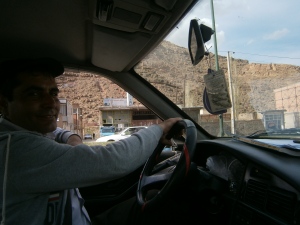 Of course we decided to find Rasul. He was so happy that he literally went crazy when he saw us. He remembered the names of all 4 of us who were here before. He took us to the nearby town Maku and bought us ice-cream. Then he left us on the road and the first truck that passed by stopped to take us.

The driver was Turk and his name was Abdullah – since he is from Turkey which is neighbor country to our own – Bulgaria, we had a nice talk. Probably we smelled a little bit because he poured ginormous quantities of lemon eu-de toilette on us. The truck is driving very slowly so we can enjoy the landscapes that surround us – and they are amazing: strange sand forms on the hills and no trees. In the evening we reach a truck parking near Evoli which is 100 km. from Tabriz. We just pitched our tent and Abdullah, the truck driver came by and said he talked to the boss of the parking to find a room for us. They gave us one big apartment with no furniture but with very nice Persian carpets on the floor. He also gave us key to lock ourselves from inside – oh, what caretakers are always the Turks and Iranians. 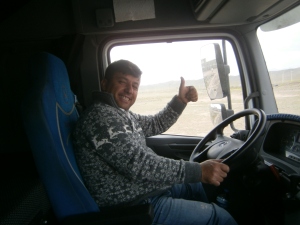 After a while the boss of the parking brought us a big tray full of bread, yoghurt, tea and food. We are very thankful and do not know what to do because he doesn’t want money. Before we go to sleep we take a shower at the parking bathrooms and Abdullah is guarding and keeping us safe all the time. This safety paranoia is very amusing for us because Iran is the country with least crimes in the world – or at least had the first place in 2007. 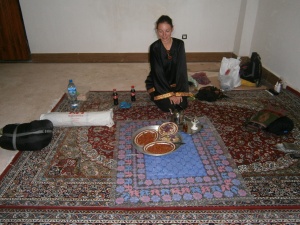 First place to sleep in Iran