THE JOURNEY HAS BEGUN 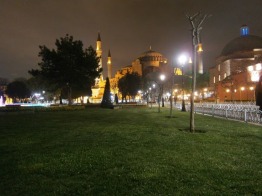 Our journey to Asia started today!

In the morning we started from Sofia to Burgas with a friend’s car. Then we found a friend to take us to the border of Bulgaria and Turkey.

The road through Srandja (the largest mountain in Bulgaria) is empty. The weather is foggy and rainy. We pass a check for Syrian fugitives at the border and we take an old man who is hitchhiking. Then we reach the border town – Malko Tarnovo.

It is a small town and it looks  the time here has stopped. The streets are empty and many of the houses are uncoated so you can see bricks they are made of. At last we pass the border. It consists of a small building. The customs officers working there seem bored and are not interested in us.

We pass the border fast and here we are on Turkish land. We start hitchhiking and the second car that passes by stops and takes us to Gorlu – a town situated only 100 km. before Istanbul. In the car are a boy and a girl who are Bulgarians but with Turkish origin. They speak only Turkish but we feel close to them since they look and behave like Bulgarians. The boy is not happy with the other drivers on the road and criticizes the way they drive.

The hitchhike form Chorlu to Istanbul

We stop at Chorlu and we sit on a bench near the road. Finally we are free again! We can eat, sleep and maybe even fly under the bright blue sky – hitch-hiking is the best! There are many people who are blond or with red hair – which doesn’t match the stereotype that all the Turks are with brown or black hair J The people around us do not even notice we are foreigners. We start to hitch-hike and after only 5 min. a car with two smiling people stops and takes us to Istanbul. Inside plays loud Arabic music and they speak energetically. 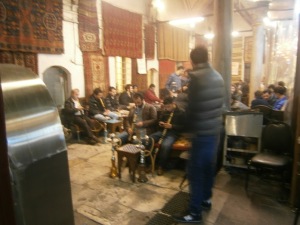 We are back at the Orient – where we feel alive and at Home. Istanbul is very developed city – they have good infrastructure, their roads are great, there are millions of cars, malls and high buildings. We find ourselves in a terrific traffic jam and we move with the speed of a turtle.  It takes us one hour to reach the centre of the city. Our friendly driver leaves us at a metro station and we find ourselves among a colourful crowd with people from all the countries of the Orient.

It feels very exotic – it is like we have never been here before (we have been but some years ago). We decide to go down town where everything gets even more striking. While we walk toward the Blue Mosque – Sultan Ahmed we see many things – nice oriental restaurants that always have someone in front of them who invites you to come in and try their kitchen, thousands of small stores that sell oriental lamps, colourful carpets, thousands of sweets, Arabian boutiques for luxury dresses, mosques… and all this at the background of old times architecture. While walking we see a café for smoking oriental pipe – nargile. The sweet aroma caresses your nose at the mere entrance. There are many men sitting on small chairs, smoking – and everything inside is shrouded in sweet smoke.

Istanbul hides millions of secrets. On the street we notice there are many beggars who are mostly women and children and judging by their clothes we think they are Syrian refugees. We walk the streets till 11 at night and then we go back to the bus station where we intend to sleep. Our senses and we are tired of so much we saw, smelled and tasted. We find a place at the bus station between first and second floor and we spread a carpet. After a few minutes comes a guy and says this is his place because he had left a bag of towels before he left. We didn’t want to argue so we moved on the terrace below. 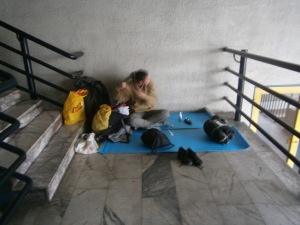