The Himalayas are the highest and mightiest mountain range on Earth and definitely a place one should visit at least once in a lifetime. The alien beauty of the landscapes, peaks scratching the sky, the mere scale of those huge places, isolated traditional hamlets and ancient Tibetan monasteries are things that can’t be described with words, things that you have to see with your own eyes in order to experience them.

Big part of the Himalayas is located on the territory of Northern India. Located in the most northern part of the state of Jammu and Kashmir is the region of Ladak which is praised for its moon-like landscape. The capital is called Leh (3500m) and its only connection with the rest of the world are the two sole roads that are closed most time of the year, blocked by huge amounts of snow.

One of the roads is through the town of Jammu – Kargil- Leh and the other Manali – Leh is considered to be the highest motorable road on the planet you can drive through with a car.

The route Manali – Leh goes through five passes with an altitude from above 4000m, the highest from which Tanglang La has whole 5328 m. The rough conditions, poor state of the road, frequent landslides, rivers that suddenly start flowing over the roads in combination with the high attitude, make this mountain pass an extreme experience for every driver and an incredible challenge even for the craziest hitchhiker.

Here we will try to share our impressions, as well as some piece of advice  that could be of good use for those heading towards that extraordinary route.

One of the most popular mountain resorts of India, both for local and international tourists. Colorful crowds, hundreds of places to eat out, souvenir shops, couple of Hindu temples, a Tibetan monastery and a hippie backpackers neighborhood in the old town can make your stay here quite interesting. Such a stay would also be beneficial for your acclimatization to the lower temperatures and the high attitude. The peak of the season for the Indian tourists during June and July can become difficult to handle, especially if you are not used to big crowds. If you are after a little bit of loneliness and solitude you should head towards the upper parts of the old town. Here you can also find small and tranquil hostels with a home stay feel and even some secluded spots for camping going up the stream of the river.

The first think that you have to do is make sure that the Rotang pass is currently open. Every year this happens on a different date depending on the meteorological circumstances and the amount of snow.

We decided to go on an alternative route walking around 4km from the western side of the river in order to escape the heavy traffic at the crossroad for exiting the town. Even though this route is quite longer it passes through a picturesque villages and neighborhoods until you reach a bridge over the river connecting to the main road. The first part of the road has a very intense traffic, mostly taxies, because it goes to one of the big ski resorts. (Slang valley 3300m). Rotang mountain pass is a big tourist attraction itself, for the fact that most Indian tourist have never seen snow before.

All along the road you will witness dozens of bizarre stands for renting out of old-fashioned ski suits and rubber boots that look as if they were from the colonial times. 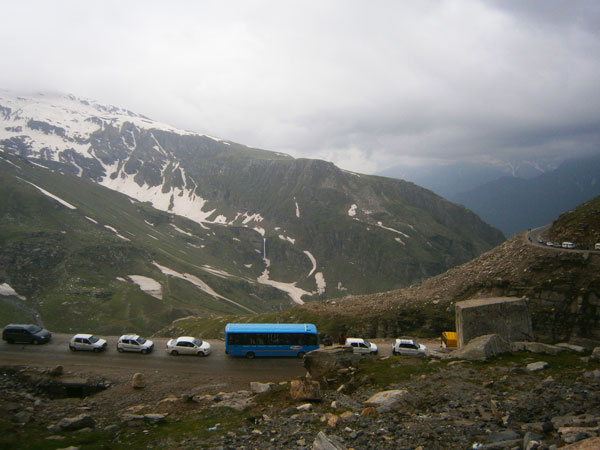 This part of the road is also not optimal for hitchhiking because most of the cars passing are taxies.

Private cars are few and trucks are not allowed during day time. We personally managed to reach the turn out leading to the resort trouble free. After that however we had to wait for several hours without anyone stopping and when it got dark we had to spend the night there. Next morning we got up before dawn in order to catch one of those „mystical“ trucks. We managed to do that, but after less than an hour we had to stop and wait until the next day, for the cars full with tourists that were already on the road. After a very long waiting we were finally picked up by an Indian businessman. Huge lines of waiting cars, traffic jams and endless waiting are the norm for this part of the road.

WARNING  Be aware that while staying overnight at the entrance of the pass in any direction you will be exposed to extreme low temperatures and possible snowfall. Most cars are traveling to the pass and back, If your plan is to camp in a tent you have to be adequately prepared.

Distance: 67 km And so the adventure begins

Buddhist Monks in the Monastery on the Way

After you have the mountain pass behind you, the traffic almost disappears. Most of the cars go back to Manali. The roads are in extremely poor condition. Immediately after going through the pass you enter the region of Lahul. The vegetation and the whole landscape suddenly change and the place of the big trees is taken by massive mountain peaks and ridges.

Passing cars are  rarity. The trucks move in groups during specific time frames. If a truck stops it is a good idea to make it clear that you want a free lift, because sometimes it can be that the driver has different expectations. There are a good amount of Indian adventure travelers driving 4×4 trucks or cars so you could get a ride from them too. If you are on solo trip or ready to separate you can try to hitchhike on a motorbike. There are lots of motorcyclists traveling in big groups on the route Manali – Leh.

This area is populated by ethnicities close to the Tibetans, who are guest friendly and polite folks. There are several Buddhist monasteries. The stay in the town of Kilong is advisable because it is very beautiful and there is a lot to see.

Waiting time: Couple of hours depending on your luck, there are hardly any cars passing

Time for passing: One whole day

The time for waiting strongly depends on your luck in that particular day. There are almost no cars and trucks. During the first week after the opening of the pass there are no busses, so if a truck stops   you have to explain to the driver that you are hitchhiking and not looking for a paid ride. The trucks usually go directly to Leh, don’t make long stops and even less so over night, so you have to be prepared to handle 20 hours of some extremely bumpy ride. If you manage to catch a car there is a possibility that you will spend the night in one of the two high mountain base camps Sarchu (4300m) or Pang (4600m). 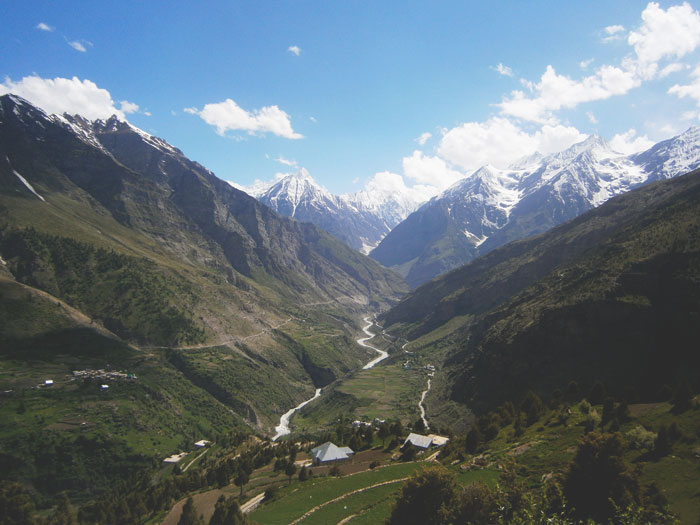 We were lucky and almost immediately got picked up by cars of Indian travelers going to Leh. The road is very very bad. After the steep climbing up of the first mountain pass Baracha La, the landscape change dramatically and all trees and vegetation completely disappear. After the pass is  the border at the end of Lahul region. There is nothing else left but to contemplate the unbelievable beauty of Ladak region, which is also called the Small Tibet.

The sole official place for camping is the tent camp of the Tibetan nomads Sarchu, where you can spend the night. There is also small medical center. After that it is time for some mind blowing serpentines and the climbing up of the next two mountain passes Naki La and Lachalu La. Here it is possible to notice the first signs of high attitude sickness – headache, nausea, asthma and insomnia.

In the next camp, Pang, as well as in the previous camp there is a field hospital where you can breathe in some oxygen for free. In the field camp of the Tibetan nomads you can also stay over the night. This base camp is higher than the previous one with around 300m. , therefore so are the chances to experience the symptoms of high altitude sickness. The few people that decide to stay over the night tend to choose the camp of Sarchu.

We chose the base camp of Pang and we had to bear the consequences. On the next day our driver was feeling very sick and we had to stop for him to vomit and to keep an eye on him so he does not collapse behind the wheel. The rest of the crew was also feeling sick.

Waiting time: If you have to change your means of transportation on that place don’t worry – nobody would leave you there.

Dazed by the lack of oxygen and the boundless beauty of the Himalayas the road will lead you to Tanglang La (5328m) the highest mountain pass on the route. Turn after turn you will discover stunning and outlandish landscapes. Bright blue rivers with enigmatic sand formations, great planes and high peaks change each other’s place along the way. Before the pass there is a 40km long plateau called More (4700m). The first village after Tanglang La is Rumtse where there are some places where the worn out traveler can take a rest. Our team was completely trashed and everybody went to get some sleep. 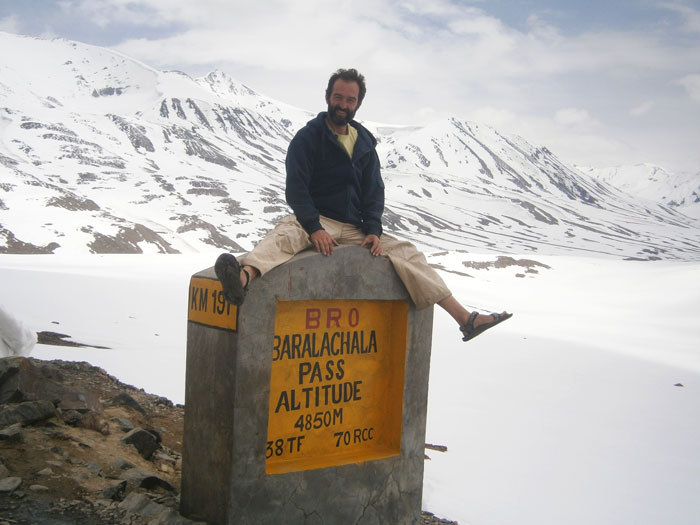 ADVICE: One of the most effective ways to fight the high attitude sickness is a rapid descent. Never stay long around the high mountain passes and even if you feel sick continue going down. Some chocolate and cookies can also bring your tonus back, so save some of those in advance.

Next is the crossing of the river Indus in Upshi. There is an asphalt road and although there are lots of turns and it is in poor condition the driving is much faster. You will pass through some very remarkable monasteries Tikse and Hemis as well as through one ancient castle. If you are planning to visit them you can get off in advance, if not, in about two hours you will reach Leh – the capital of Ladak region.

The town is extraordinary beautiful, populated by local Tibetan people dressed in their traditional costumes. The Tibetan architecture and the authentic atmosphere of the town with its monasteries, entirely preserved castles and a small touristic neighborhood with comfortable little hotels and eateries offering traditional local cuisine will make your stay a very pleasant one. From here it is also the starting point of 130 unbelievable trecks through the Indian Himalayas. 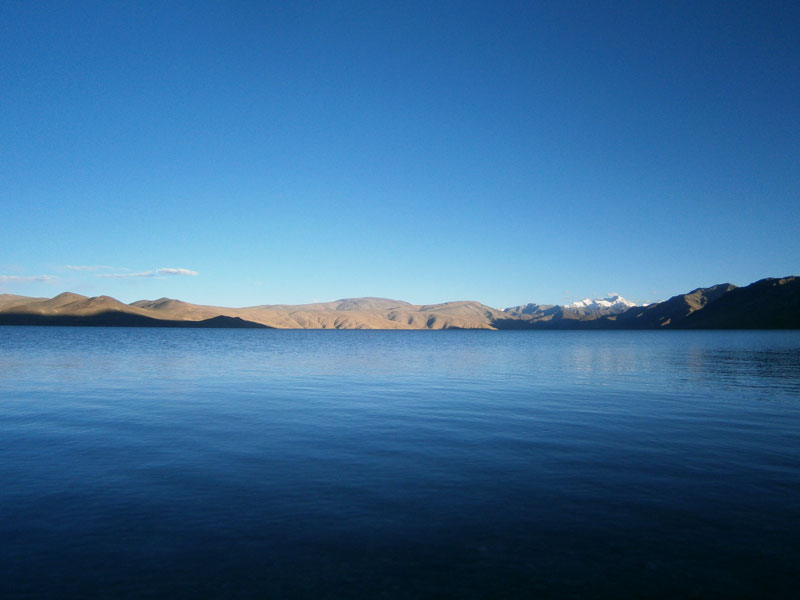 Here you can find some additional information.