Today is our last day in the mountains. Tomorrow we start the 30-hour journey to the capital of Pakistan. I don’t want to even fathom how we will survive traveling on the mega broken roads and the hair-pin bends. After that we plan to go to Lahore – one of the 3 most important cities of Pakistan. It is situated near the border with India.

So we decide to go Hushe Village (3100 m.) from where one can see Masherbrum Peak. From this village also starts the trek to the base camp of K2 (second highest peak after Everest, very difficult to climb).

On the way to Hushe

In 3 days one can reach K2 but one has to pass through Gondogro La pass 5900 m and the trek is very difficult. We totally want to come back some day and try to do it.

The only transportation to the village is an old Land Cruiser that leaves once a day at 12 p.m. There are almost no private cars passing by – maybe 1-2 a day. We put our luggage in the jeep and we are ready to go. But it results that the policeman that follows us everywhere has to go with us and we are supposed to pay for his ticket. We refuse to do it. Then an hour later he is given traveling expanses and we are off.

The Land Cruiser to Hushe

We are driving on dirt road that is quite dangerous, it is very narrow and sometimes we have to pass several suspension bridges that swing a lot. We stopped in one village on the road to load a cage full of about 20 hens. Two hours later we reach Hushe. Masherbrum rises next to the village. Snotty kids run everywhere. The air is crisp and cool, in the winter temperatures here fall 25 degrees Celsius below zero (-13 Fahrenheit).

On the road to Hushe

We manage to convince the policeman that follows us that there is no need for him to be like our shadow and just before sun-set we do a 2-hour walk above the village. I don’t need to repeat myself, but the views to the peaks are fantastic. Next to the village there is a “small”peak” 5000 m. that one can climb for about 5 hours and see from there K2 and Broad Peak. 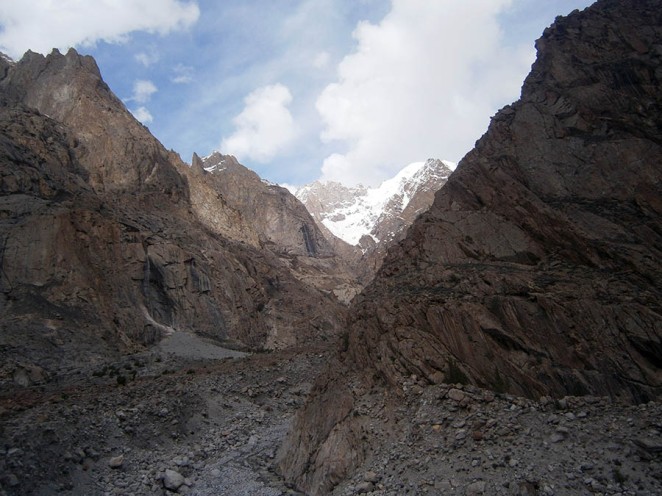 Sadly we don’t have time – the jeep leaves tomorrow at 5 a.m. and there are no other means of transportation. Next to the village we encounter a herd of gold-diggers located on the river bend. They were very joyous and reminded us of the Bulgarian gypsies. They invited us for a tea but we had promised the policeman we will be back before it gets dark so we had to leave. The herd changes its location every 2-3 weeks and the people told us they come originally form far – a town called Chilas. 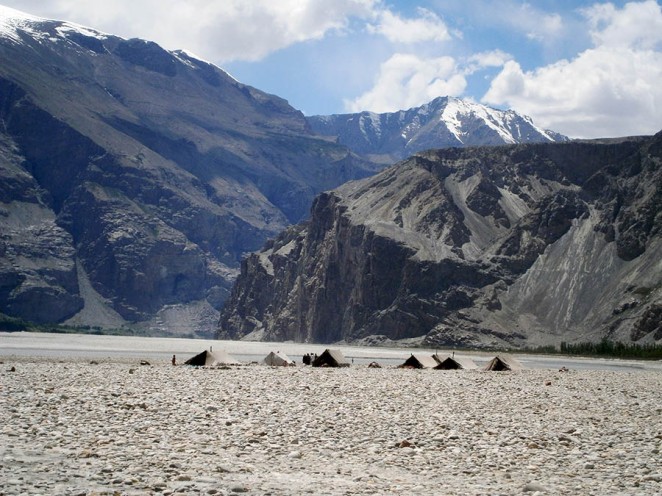 The place where the gold diggers live

This night we will camp in the yard of a hotel for 200 rupees (2$) a night. This is mainly because the policemen has to sleep somewhere close to us. The local tourist agencies and guides are making steps against the obligatory escorts because the region is super safe. Maybe the situation will change soon and people will travel more freely.

We continue traveling. In Khaplu we had met a guy with whom we traveled together to Gilgit. He lives a village on the road named Hatam and we decided to stop by and meet with him. His name is Hatham Ali and he is a professional mountain guide. He looks like German – blond hair and green eyes.

The house of Hatam Ali

In the morning he treated us to breakfast at his home in Saling Village. We ate batters fried in deep oil, named azo and Tibetan tea with salt and butter – as they serve it everywhere in this region. He showed us around the village and took us to the local school. The teachers there work voluntarily (they do not have salaries), there are no desks and everything like chairs and test books is being bought with donations. 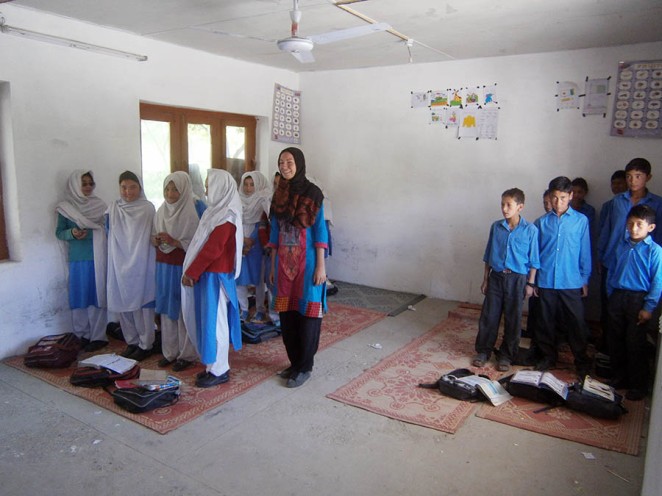 The school at Saling

People in Hatam Village do not use money because they do not have industry and do not provide any services to the outside world. But they created a system for maintaining the social life and exchange that is based on the human relationships. Hatam is chosen for mayor (or elder) but this is not a political position.

Hatam himself appointed three main committees. The first one is responsible for the water supply of the village – maintaining and fixing the tubes. The second one organizes activities and contests for the young people. The third one takes care of the education of the children and the overall knowledge and culture of the people. Everyone that participates does so voluntarily. Sometimes the committees organize meetings where they discuss different subjects.

Children on the way

Hushe village and the valley next to is one of the most beautiful places we have ever seen. During the short time we spent there we ran and jumped on the pathways, meadows and pastures, we jumped over the irrigation canals, we hopped from one rock to another. We stayed and waited for the clouds to clear and uncover the mighty Masherbrum Peak till we freeze and then we ran to the nearby bush or rock. We did this till the light of the day became mysterious and then we lost our minds completely.

1. Masherbrum hidden behind the clouds

This afternoon we start the epic journey to Islamabad. Hatam Ali drove us to Skardu and we barely miss the bus, as a result we don’t manage to buy food. Here are the highlights of the most terrible 30-hour journey we have ever experienced.

The sand storm in Skardu

This was the end of the epic three week journey around Karakorum.