Traveling in the heat with the wild balochi people and the evangelist and arriving at Multan – the city of Sufi, mango and falcons 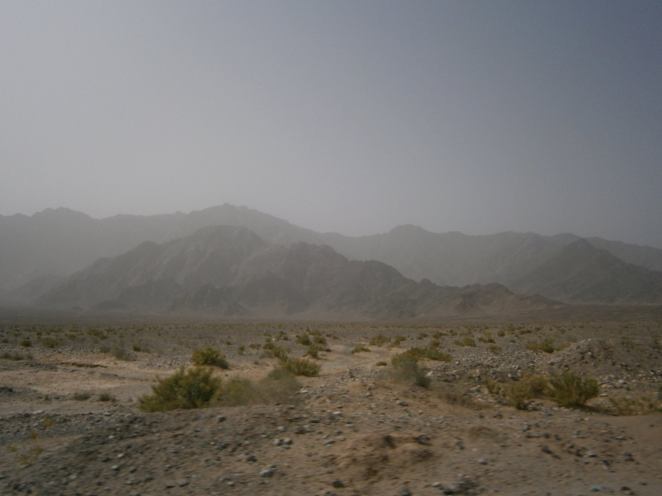 This is our second day living at the police station. We made a lair out of chairs and two plastic mat we bought to cover our sleeping mats. We have the feeling that we are here for weeks now. The day begins with drinking tea and chatting with our friends – the policemen. The boss who is short and lean but wiry, has his pants girded up to his belly button and looks like some general from the past, invites us at his cabinet to chat and watch TV. In a while a policeman shows up and gives us his laptop so we can use the Internet. Like this the day passes quickly. We can’t wait for tomorrow to come – there are so many things we want to see. 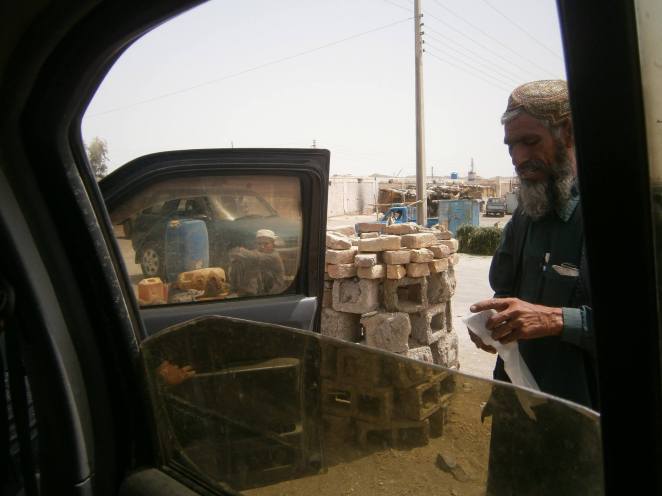 We also have a personal waiter who all the time asks us if we need anything. Respectively we eat and drink all kinds of food and beverages till we are full to the max. 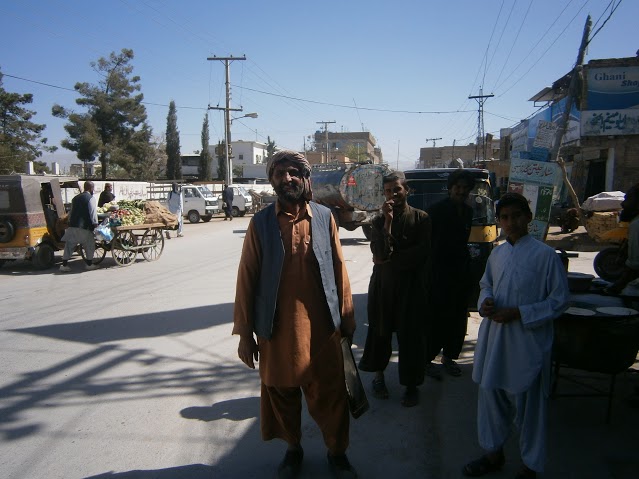 The waiter at the police station

At noon our permit to exit Balochistan (it is called No Objection Certificate or shortly N.O.C.) is issued. Arround 2 o”clock in the afternoon the policemen take us to the bus station. Suddenly they say that the bus driver are at strike because somebody was killed and we can leave tomorrow. We don’t know if they are lying to us because it already is too late and they don’t want to let us go. They want to send us to the terrible Bloomstar hotel but we refuse to go. 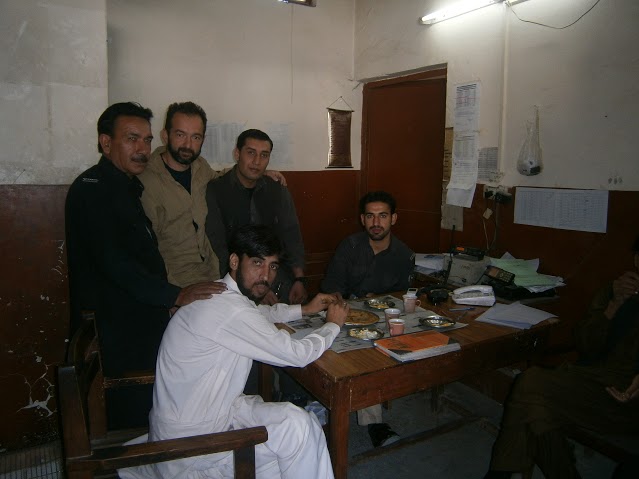 With our friends the policemen at our first home

This time we go to different police station, everybody is new to us and all is calm. We are near the train station and this constantly reminds us how much we want to go already. I hope we manage to catch the train tomorrow and be free again. Inshallah! (which literally means the will of Allah but it is used as “hopefully”). 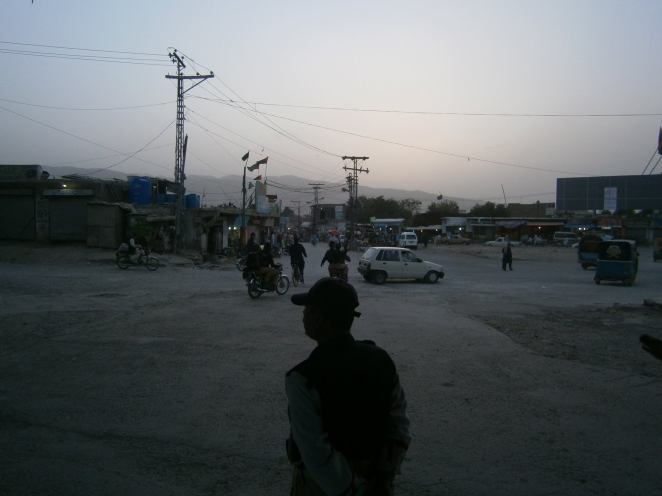 The new police station is great, it is situated in some government area and it is pretty big, so we can walk in the neighbourhood. We see trees and parrots outside – something we haven’t seen for days in the desert. We have personal office that is very clean and nobody bothers us, there are almost no people here – it is classes above the first station we slept in. I totally recommend it – just tell the policemen to take you to the Home Department.

We are escorted to the train station at 8:30 in the morning and we consider ourselves almost free. The minute we get on the train we make friends with a guy who results to be Christian missionery and together with his sister and his apprentice convert Sikhs to Christianity at their mission in Quetta. So we form our Christian corner in the train. The train is full but there are almost no people standing.

The wagon is with sleeping beds but during the day people sit on the lower beds. Our friend sings Christian songs, everybody treats us to beverages and food and nobody lets us pay for anything – to summarize: we spend the time really well. When we exit Quetta the metal blinds of the windows are lowered because the wild Balochi people outside throw rocks at the train. 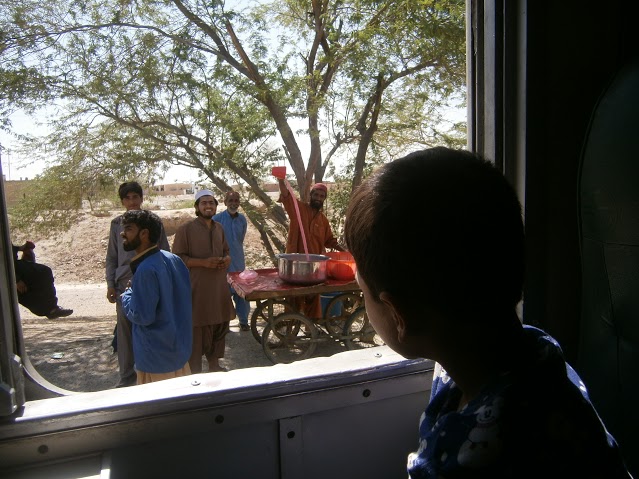 The train has many stops and at the big cities it has half an hour breaks and we get off to buy food and drinks. At noon the heat is unbearable because of the strong sun and the fan we have in our coupé does nothing but only moves the hot air. Dust comes in from the open windows and people smoke cigarettes from time to time. It doesn’t get better until the sun sets.

We are outside of Balochistan and the desert. Outside we see almost only agricultural lands and rivers and there are no policemen with Kalashnikov guns everywhere. We.are.free!!! At 2 o’clock at night, after 17 hours of traveling, we arrive at Multan.

It is this late and the streets are filled with people. We take a rickshaw to the central part of the city and we pitch our tent in one dark corner of the local park. 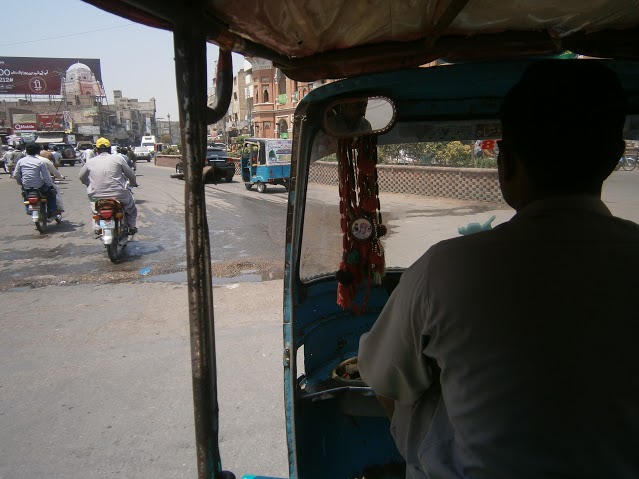 We wake up really happy at Multan – the city of Sufi, mango and freedom. We are at the Punjab region where everyone says it is really safe. We fold our tent and we go to the lavatory of the park. The people working there use one small room as a closet and we ask them if we can leave our rucksacks there. They agree and we start our sightseeing walk. 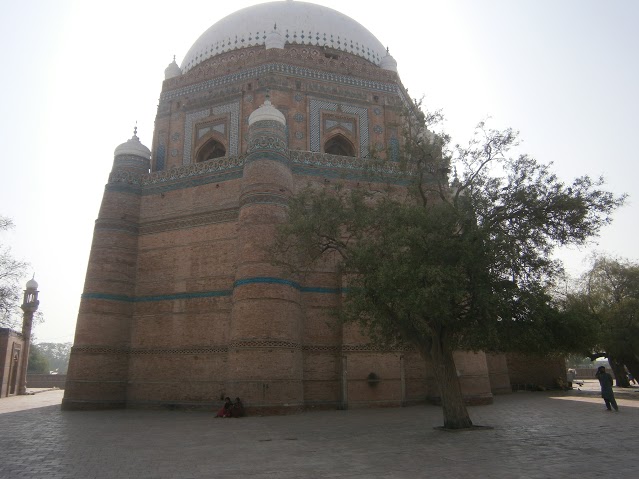 Mazar of Baha-ud-din Zakariya – dome of the Sufi saint

We are ready to dive in the city and examine the jungle of streets. It is 9 o’clock in the morning and it is already really hot. The traffic is insane, everything is covered with dust and there are many things to and explore. First we go to Mazar – the dome of the Sufi saint  and after that we start looking for something to eat. It is 9:30 and almost all the shops are closed – that is because people here go to bed very late at night and sleep during the day because of the heat. At some point we sit in an Internet cafe that looks quite strange – every PC is situated in a small pink box that can be locked… 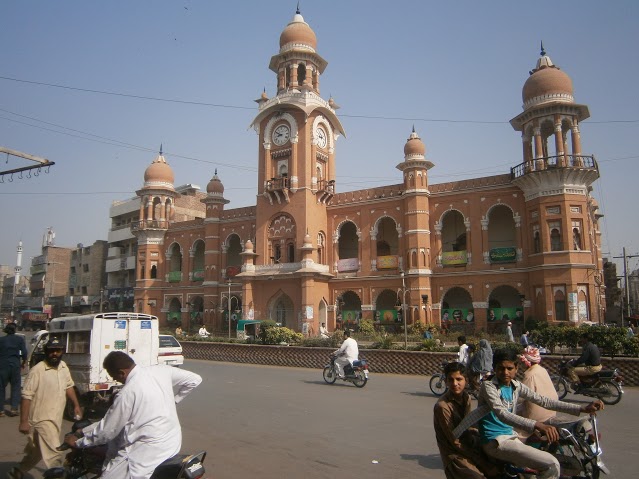 Later we go to the bazaar where one can see many small streets with shops for textiles and dresses that look like they are made to be worn by princesses. 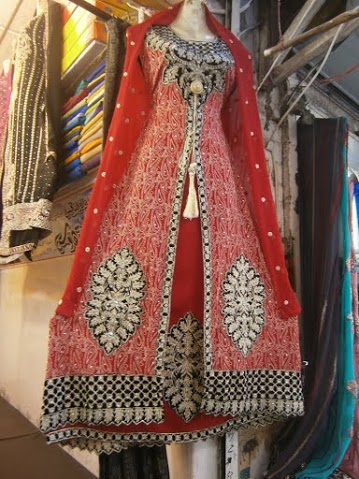 Do you want to be a princess?

There obviously are not many tourists so everywhere we go people stare at us. One rich tradesman invites us to drink some strange beverages. After our walk we go back to the park where you can see some really big falcons and crows flying around. There are beggars everywhere and every 5 min. somebody comes to ask for money. At night from nowhere crawled some creepy transvestite beggars. 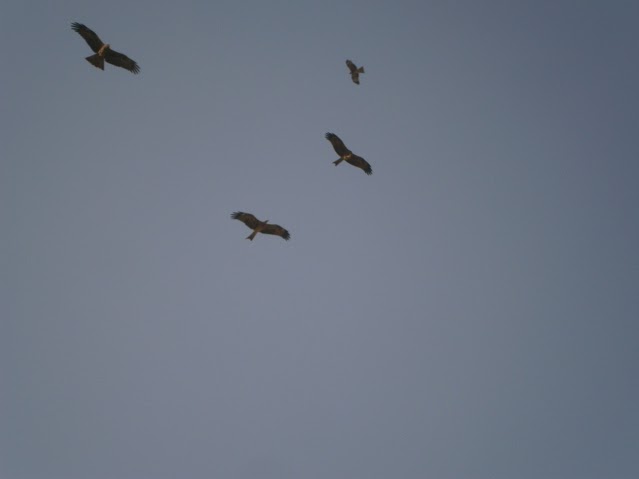 Multan – the city of falcons

We bought a sim card from some guy and he invited us at dinner. We feel really uncomfortable because we know people here earn about 200$ per month – and as usual nobody lets us pay the bill. 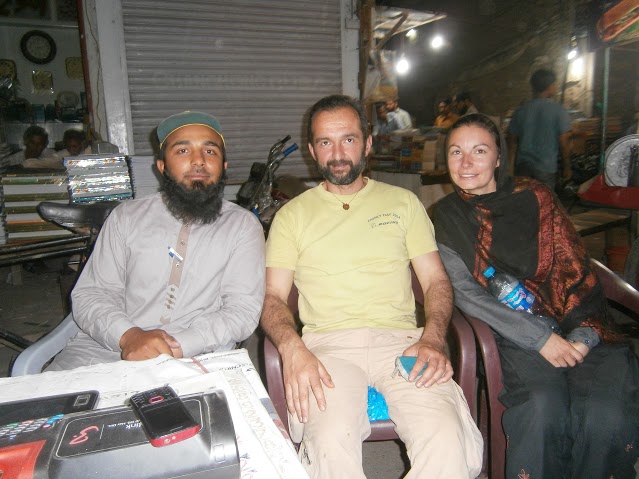 Faraz – the boy with the sim cards

In the evening we meet our friend from couchsurfing.org who takes us to the house of his friend.