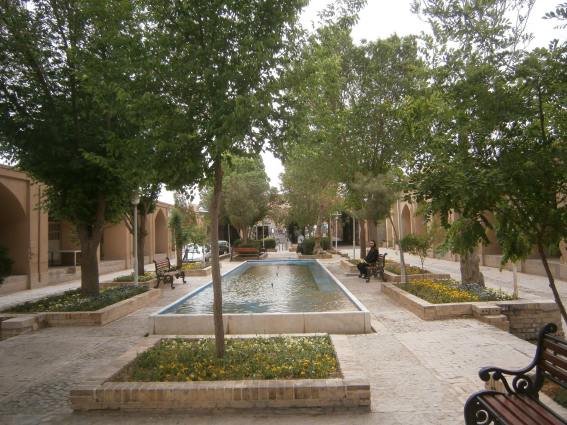 In the morning we wake in the cool park where we pitched our tent and after breakfast and making our morning toilet at the mosque’s bathrooms we go for a walk. Around noon it gets pretty hot and it is even more difficult for me to bear because I wear black dress and black veil on my head. All the day I enjoy the holes under my armpits that Mommy (that is how everyone call my mother – even my friends) made for my Iranian dress – the good thing is nobody sees them but they keep me cool.

We walk inside the narrow streets of the town that consists of houses made of sun-dried brown bricks and everywhere we see the special wind towers that all the houses have to keep them cool. We see many mosques, hamams (Persian bathrooms), bazaars and old houses. The people in the streets are very kind and all the time ask us if they could help us with anything. 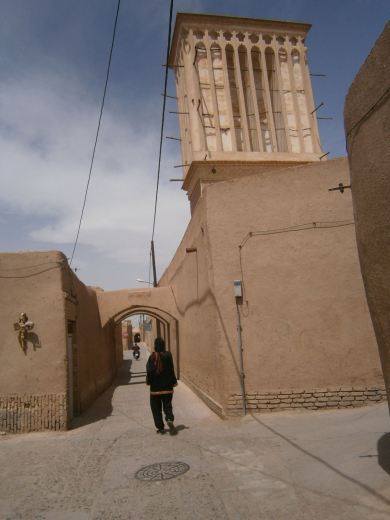 The brown houses, the black silhouettes of the women dressed in “chador”, the songs pouring from the mosques, the small stores of myriad craftsmen, the little grocery stores makes us feel like in some beautiful Persian fairy tale. There was only one thing that happened and we didn’t like so much. Mr Shushtari (my husband) needed belt repair and we gave his belt to an Afghanistanian guy who repaired it but wanted to keep more money than he said at first. We took pity on him because he is veteran from the war – with scars and trembling hands, and left him 50 000 rials instead of 20 000 (around 2 euro). 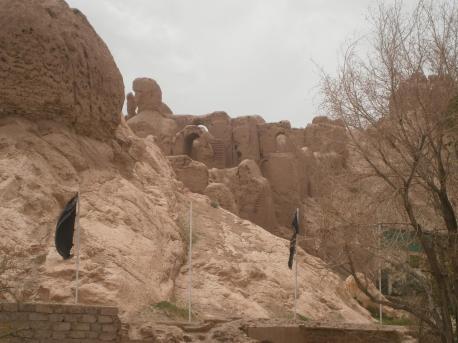 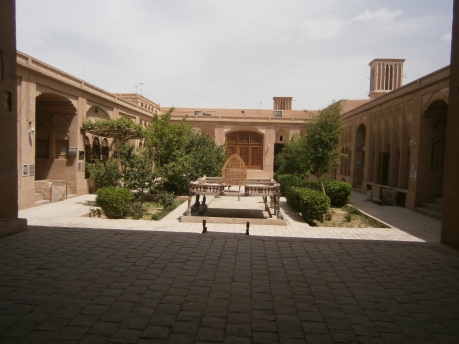 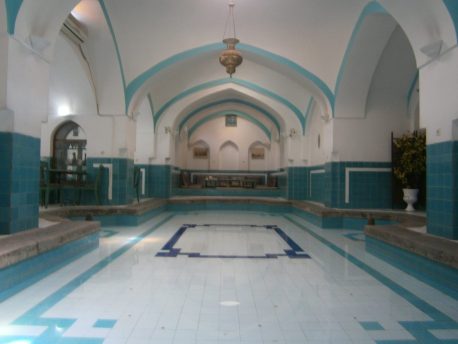 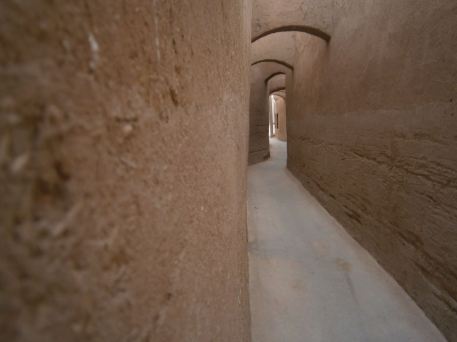 The late afternoon we decide to start hitch-hiking direction Kerman because we probably won’t be able to pass 400 km in just one day and will sleep somewhere near the road. We need 3 different buses to go out of town. Outside it is some strange rock desert with mountains far in sight. A car takes us and leaves us 5-10 km outside of the town. Soon it becomes to get dark and a pretty luxury bus with balochi people on it passes by. We stop it and negotiate a very reasonable price – 3 euro per person for 400 km., and we decide to take it. We arrive at Kerman at night, there is nobody at the bus-station which is actually pretty far from the town, and we pitch our tent near it.

In the morning we had some interesting soup consisting of various beanshaped grains for breakfast and we tried to find some transport to the town and since there was none we hitch-hike to the centre of the town. We left our backpacks in a store for building materials and we started sightseeing.

We visited the old bazaar, the Friday Mosque and some antique structure dating from the Sassanidian period. Thanks God it is cloudy otherwise it would have been impossible to walk under the sun for several hours. 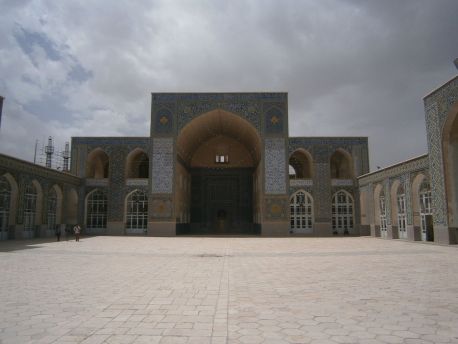 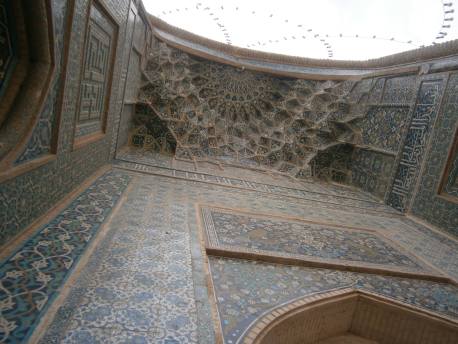 The ceiling of the mosque 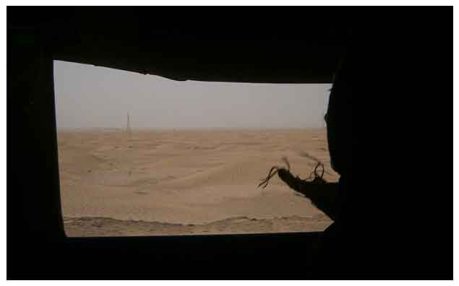 Desert on the road

Far away one can see some incredible high rocky mountains and after them is the hottest desert on earth – Dasht-e-lut. Some time ago they measured temperature of 70 degrees Celsius in it. At the moment the temperature there is 40 degrees Celsius and in Kerman it is 27-28 – the distance between them being only 100 km. Sadly we won’t have time to camp in the desert but we will definitely come back to explore this region more thoroughly. 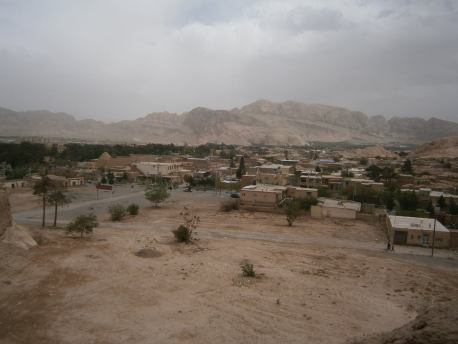 In the evening we met our hosts from couchsurfing.org who turn out to be really open minded and joyous. In the car of one of the boys we hear Pink Floyd playing, the other guy is one really crazy philosopher and Ati – the girl, tells us many things about life here and that she is fed up putting veil on her head. The young people in Iran are superintelligent and do not give a damn about the traditions. 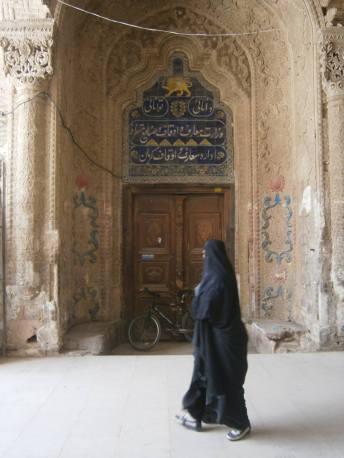 We wake up and Ati had already been gone out. She had left us a the keys to the house and a note to close the door well if we went out before she had come back. It is amazing how people trust you here and their total lack of prejudices and fear! Ati’s apartment is really big and full of expensive stuff, Persian carpets, silver utensils and many more valuable stuff.

Luckily for us she came back before we had left, we drink some coffee and she drives us down town. We sat in an internet club where the boss of the premise didn’t want to charge us for the time using the internet. After that we ask where to pay the prepaid credit to our phone and the person we asked to wanted to pay for us – it was difficult not to let him do it : )

We hitch-hike to Bam. The last guy who took us left us at the middle of the distance and started to wave his hands at the cars to stop for us. Soon a car stopped and we get in. Inside the car we see a strange family – man, woman and baby. The woman was wearing strong night make-up and they had a driver. The driver had really dark skin, his face was burnt and his hand had only two fingers. We try to persuade them they can leave us near Bam and that we can continue from there on our on, but the communication between us is limited due to language barrier.

The driver looks like a mixture between some drug cartel boss and character from a David Lynch movie. Form time to time the car enters in the opposite lane because the driver has difficulties managing the wheel with his damaged hand. We are near the border now and we feel a little uncomfortable because all the traffic of heroin and opium from Afghanistan to Europe passes by through this region. Outside is really hot and we see only rocky deserts. The sky is yellow from the dust in the air and for the last 1000 km we travel through semi-deserts to wilder and less and less inhabited areas.

Finally we reach Bam and our companions head to the town. We tell them to stop but they keep on driving and the situation escalates. Finally they stop in a small street and tell us there is a hotel nearby. So we take a deep breath, relax and get out of the car.

Tomorrow we must enter Pakistan so we don’t have time to visit Bam’s castle. It is getting dark andwe don’t want to hitch-hike in the dark in this border regions. So we decided to take a bus to Zahedan – the border city since we are still at 300 km. from it. The bus is full of balochi people who made their evening prayer on their carpets before the bus left.

We arrive in Zahedan at 1:00 o’clock in the morning and we take a cab to the house of some friends who were introduced to us by Mohammed in Kerman. They are three really nice people who enjoy traveling very much. We go to bed very late – at 3:00 in the morning and after only 4 hours of sleep we get up and prepare to cross the border with Pakistan. 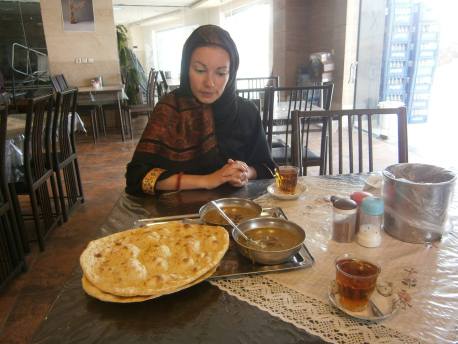 Breakfast at the bus-station 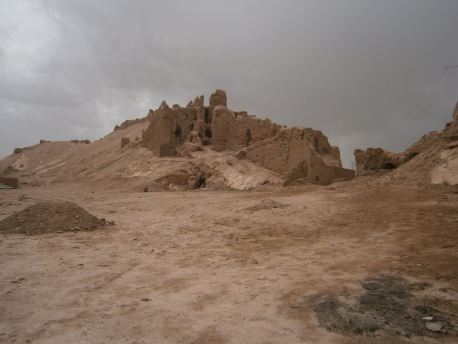 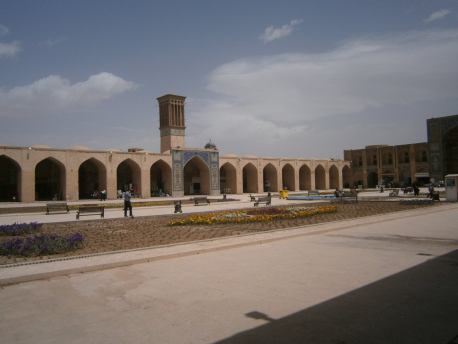