Bald head, wide smile, with every inch of his body exposed, without even a piece of cloth to cover it, with a nice belly, broom and a utensil for water made of coconut shell in his hands. If you see a person like this on the streets you will probably think: he has a severe mental illness, or maybe I am going crazy, or there is some secret I can’t grasp?

Who is this person? Few have heard about the people who practice extreme asceticism – the followers of the sect Digambara (literally “dressed with the wind”) – a major branch of the Indian religion Jainism. 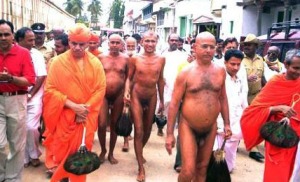 But there is a reason for us to get acquainted with their philosophy and many things to learn from the teachings of Mahavira – the founder of Jainism. This is a very ancient religion that started B.C. and it is even older than Buddhism. Nowadays it still has many followers across India. Jainism has two main sects – Svetambara and Digambara. The believers keep in high honor 24 saints and teachers called Tirthankara. The 24-th is the saint Mahavira.

It could be said that this is one of the first thinkers on the planet who elevated the ideal for non-violence and pacifism to a religion. Mahavira follows the motto “live and let live” and postulates that one must not cause harm to any living being (even the smallest of animals and insects) – not with words, nor with thoughts and actions – this is called the ahimsa principle.

Mahavira preached that as men and women do, all sentient beings too feel pain and are afraid of death. According to his teaching if we don’t want to suffer then we shouldn’t make anyone or anything suffer. Jainism practitioners follow this principle to the extreme – they always clean the road in front of them with a broom in order to not step on an ant or any other insect.

The followers of this religion are vegetarians and in addition they don’t eat root crops such as potatoes, turnips, carrots etc. that need to be “killed” in order to be eaten. Pacifists par excellence they live in peace with all Earth’s inhabitants. Here are some of the flabbergasting vows that the Jainism ascetics, who renounced the material world, take:

The only two things a Jainism practitioner can carry on oneself while he/she roams the world is a broom made of peacock feathers, with which to clean the path in front of him/her in order to not step on an insect, and a water utensil made of coconut shell.

There is a saying that taking this vows is like walking on the edge of a sword.

In order to enrich our consciousness and truly understand something it is not enough to just read the letters in front of our eyes. If you want to feel how amazing this kind of life could be just close your eyes for a moment and imagine you are that person. See yourself walking totally naked in a forest with a broom in one hand. A life where you don’t own anything, but maybe have it all?

Is it possible that such a reality and consciousness really exist?